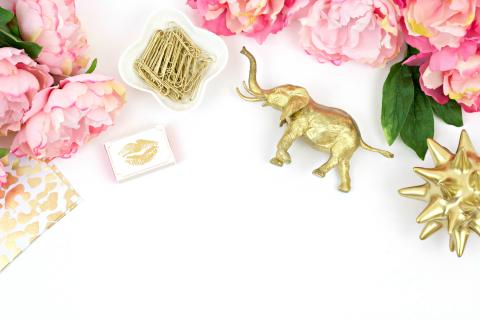 I have many fond memories growing up. My brother and I were very close, just years difference between us. Reflecting back there are many stories we chuckle about. My brother was mischievous and often backtracking out of trouble. I can recall one morning waking up and watching him tiptoe past my bedroom door, his pajama top full of newly baked chocolate chip cookies my mother had baked the night before. Knowing my mother would be upset with him I tiptoed to his bedroom door just in time to watch him devour the entire batch. Sure enough, when my parents awoke they were dismayed to say the least at the crumbs left in the cookie jar. I watched as my parents interrogated my brother who sat with big innocent eyes peering up at my father.

Out of fear of the inevitable consequences, my brother proceeded to explain in exaggerated detail how a BIG pink elephant came through the floorboards in the kitchen, ate the cookies, and then disappeared through the floor again.

An unusual analogy, but my brother’s pink elephant is not too much different from stories we make up in our minds as adults. Our bodies daily give signals. Some days we feel good, ready to take on the world. Other days we notice changes we know are abnormal. Out of fear of potential consequences we often make up a story to justify the discomfort. This stall tactic can, unfortunately, have negative effects on our health.

Case 1: Mrs. Doe had a demanding job that involved walking on hard concrete floors. One day she noticed her right foot was sensitive at the base of the toes. Although her foot had swollen to the point that she could not fit in her shoes, she was reported to tell neighbors that the symptoms were from a “strain.” The pain was “nothing.” Sticking to her story, she refused to see her podiatrist for 3 weeks. When she could no longer tolerate the pain she limped into the office. After careful evaluation and comprehensive xrays she was found to have displaced fractures of 3 bones in her foot. Had she addressed her symptoms early, treatment would have simple shoe changes and job restrictions. Because she had ignored her symptoms, her condition now required surgical intervention and rigid cast immobilization.

Case 2: Mr. Smith noticed a “sore” one morning on his left foot. For many months, he ignored the lesion. Mr. Smith dismissed the condition as not healing because of “poor circulation”. The lesion gradually became larger and began to drain. The borders surrounded the lesion became raised and irregular. When the area became red and inflamed 6 months later he begrudgingly presented to his podiatrist. The area was evaluated and a biopsy was performed. The pathology report came back as an advanced stage of squamous carcinoma. Patient subsequently underwent surgical intervention, radiation, and eventual amputation. Had the condition been diagnosed sooner, limb salvage may have been possible.

Case 3: Mr. Jones woke one morning with a red, hot swollen foot. He had been at the beach the day before, running, and playing in the sand with his grandchildren. Mrs. Jones was concerned as her husband was a diabetic and had little feeling in his feet. Mr. Jones continued dismissed his symptoms as an attack of “the gout.” Over the next few days his foot became increasingly red, swollen, and painful. After the 4th day following the onset of the symptoms, Mr. Jones noticed red streaks progressing up his leg. He now had a fever of 102.5. His wife rushed him to the hospital. MRI evaluation revealed a complicated abscess in his foot. Emergent surgical intervention was necessary. The abscess was subsequently drained and four, 4 mm sea urchin spines were pulled from his foot.

Each of the above patients’s fabricated a scenario to explain their symptoms. As a result medical help was delayed and the consequences were much worse; Mrs. Doe required surgical intervention for her fractures; Mr. Smith underwent a potentially preventable amputation; Mr. Jones put himself in a potentially limb threatening position.

You see we all have pink elephants in our lives that help alleviate our fears whether it is a “strain”, “poor circulation”, or “the gout.” Being honest about your body’s signs and symptoms, and seeking immediate medical treatment will most commonly lead the fastest, most uneventful recovery.

What happened to my brother you might ask? Well…..my father was infuriated by his fabricated story containing the fictitious pink elephant. His punishment was much worse than had he told the truth. He was sentenced to a prolonged time period of time out in his room with no toys and NO cookies for a month. I was delighted, more for me…